I’ve been up The Tooth twice so far, first on Oct 10, 2013, and second on May 16, 2015.   In October 2013 we had clear blue skies, but it had freshly snowed on the route.  In May 2015 we were socked in with fog all day, but luckily the rock was bone dry.  Happily, both were successful summits.  As it’s probably the most popular alpine rock climb in Washington state, there’s no shortage of information out there.  That makes this overkill information on a pretty easy route, but here’s my notes on how to climb it, using a mix of pictures from both of my trips.

5.4, 4 short pitches
Trailhead at 3100′, leave trail at ~4100′, rope up at 5280′, summit at 5604′.
~3 hour approach at a moderate pace from Alpental
Early start highly recommended to beat the crowds.
Every belay anchor is either a tree or rock horn.
To descend, rappel the climbing route.  There are more established rap stations than necessary.
12 hours car-to-car is a pretty typical time if you’re doing this climb to give experience to new climbers.  Stay sharp on efficiency, for your sake and others.

Drive to Snoqualmie Pass.  If coming from Seattle, take Exit 52, left at the base of the ramp, under I-90, then almost immediately a right-hand turn on to “Erste Strasse Rd” toward Alpental.  Go 1.3 miles past I-90, and park at the trailhead for Snow Lake at 3100′. 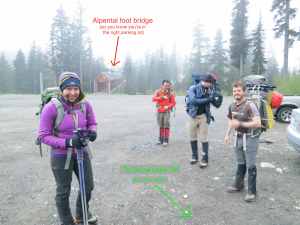 Follow the Snow Lake trail.  At about 2.5 miles, a small wooden sign marks the trail intersection between Source Lake (straight) and Snow Lake (right turn.)  Continue straight, towards Source Lake, and the trail will gradually curve leftward.  Soon after that, views of the valley open up, and you’ll be able to spot Source Lake below you, and The Tooth visible in the distance above you.  As soon as you see a continuous talus field to your left, depart from the trail (~4100′,) and make a traverse across the talus that descends at first, and then starts climbing towards The Tooth. 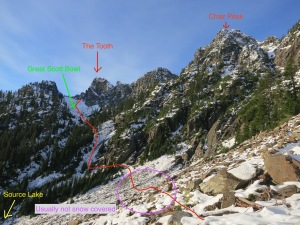 Ascend talus (and higher up, snow,) by whatever you find to be the path of least resistance (sometimes there’s neon flagging tape) until you end up in Great Scott Bowl, beneath The Tooth.  To the left of The Tooth is a pointy rock finger.  Go up the gully on the left side of that. 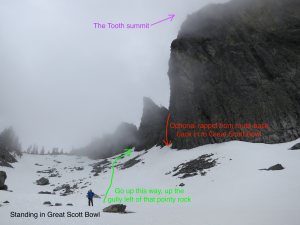 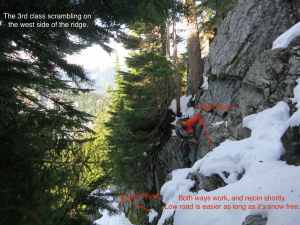 Once on the other side, keep right and scramble (some 3rd class) on this westward side of things amongst trees for about 100 feet north.  Once you’re out of the trees and able, ascend right, towards open sky, to arrive at the big notch between The Tooth and that pointy sub peak.  This notch is the base of the South Face climbing route.  Stash any gear you’re not going to climb with here, and make sure you put everything politely out of the way of any other climbing parties that may arrive there after you.

The climbing route itself is actually pretty intuitive.  Just climb what feels easiest to you, keep moving upwards, and you’ll naturally stay on route.  Still, I know I feel better with as much beta as possible, so here you go. 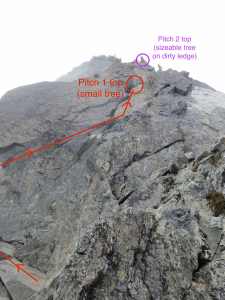 Follow easy ramps that angle first left then right then follow the big vertical crack system.  Your first option to end the pitch is at a small tree that’s also used as a rap station (guessing 80′ up.)  You could also optionally keep going a bit higher to a rock that’s been slung as another rap station. 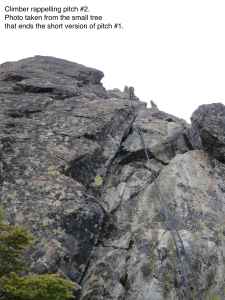 If you stopped at the small tree (making pitch #1 short,) then start pitch #2 by going right, and up a vertical but easy crack system.  Above that, follow slightly zig-zagging ramps, past a rock slung as another (unnecessary) rappel anchor.  Remember to use double runners when you change direction, or suffer the rope drag.  Finally, finish on steep but blocky rock until topping out on a dirt-covered ledge with a sizeable tree.  While the height of this pitch (from the pitch 1 small tree) is just less than 30m, you’ll use a little more than 30m of your rope due to the zig-zagging on the way up. 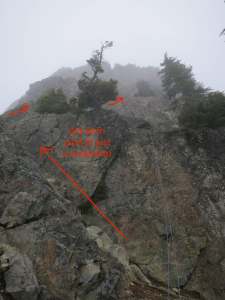 Pitch 3 is mostly a 3rd class scramble, with maybe some 4th class moments thrown in. However, there’s some exposure at points, and the base of the 4th pitch is only about 110′ away, so you might as well lead it like any other pitch of rock climbing.  Use your doubles and sling the trees you pass, but there’s not much need to place more pro than that.  This pitch ends on a ledge with more than one tree setup as rap stations. 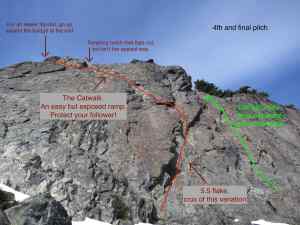 There are two ways to climb the 4th and final short pitch.  Both get you on top of the same big comfy summit.  To the right, there’s a direct route up to a small notch with a tree in it.  I haven’t climbed this, but I’m told it’s easy, 4th class or maybe 5.0.  To the left, there’s a very fun variation with a bit more challenge!  Climb up a flake past two permanently-fixed cams.  This gets you up on a ramp called “The Catwalk,” on which you traverse left until you feel ready to pull up and on to the summit.  To me, it was best to ignore the first temptation to top out, and go further for a slightly easier spot to pull up and over.  Once on top, walk over about 15 feet to reach an awesome rock horn to use as a belay anchor. 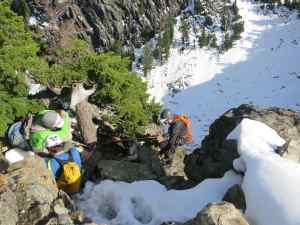 From the summit looking back towards the climbing route, on the left a small step down leads to the tree in the notch where the easy version of the 4th pitch ended.  That tree makes a fantastic rap anchor, and probably already has slings & rings on it.  A ~25m rappel will put you back on the ledge where you finished the 3rd pitch.

If you’re really comfortable and confident in your down-climbing skills, you could scramble down this pitch unroped.  Discuss it while up at the summit, and make rappelling the 4th pitch as long as possible.  Only do that if everyone in your group is comfortable and experienced, NOT if you’re taking a beginner out for their first alpine rock experience.

Or, if you choose to use a rope and rappel the 3rd pitch, go for it!  Setting up saddle-bags will work better for this one than trying to throw the rope.  I found a 60 meter rope comes up just slightly short of 2nd pitch’s top tree, so you do have to get off rappel and down-scramble a bit, but that section is short and extremely well protected by trees around you, so it’s a much more palatable unroped down-scramble. 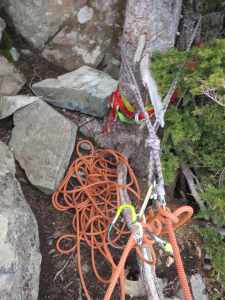 The dirt-covered ledge with the sizeable tree where pitch #2 ended is an ideal spot to rappel from.  Consider scrambling down to it if your previous rappel didn’t reach it.  However, the tree here is set fairly far back from the edge.  As of May 2015, the slings on the tree weren’t nearly long enough, so your rope is going to sit on the edge and may give you a ton of friction when you try to pull it after rappelling.  I think it would be great if someone went up there with two or three long pieces of 1″ webbing, cut away the old short webbing, and rebuilt that rap station with a lot more extension.  (I’m guessing 15′ sections of webbing would do nicely.)

Rappelling from the small tree on the 1st pitch back to base of the route is easy.

Optional:  Rappelling from the base of the route into Great Scott Bowl 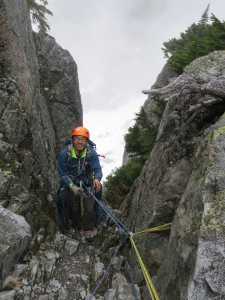 Once you’re back where you started the climb, you have two options to get back into Great Scott Bowl.  You could reverse the scramble route you took to get up.  Or, you could rappel down the big gully you see on the east side of things.  There are two disadvantages to doing the rappel: 1) It’s slower than just reversing the scramble route, especially if your party-size isn’t small.  2) There’s a noteworthy amount rockfall hazard in the gully you’d be rapping down.   If you choose to rappel this, I highly recommend tying together two 60m ropes to do a double-rope rappel.  That’ll get you down onto the snow of Great Scott Basin in a single rappel.  (Otherwise people would have to stop and hang out at an intermediate rap station mid-gully.)  Once someone gets to the very bottom, they should shout VERY LOUDLY that they’re off rappel (it’ll still be hard to hear them there) and they should move FAR off to the side, so that it would be physically impossible for any rocks bouncing down the gully to reach them.  All that said, I did take advantage of this last optional rappel both times I climbed The Tooth.  Whatever you choose to do, be safe!

3 thoughts on “The Tooth”